So, I've been working along on the second pair of Convertible Mittens!  The first pair is done, but the second is now in progress!

Why a second pair?  Because these have been accepted for the Knit Picks IDP program  -- and so, quite understandably, I'm knitting a second pair in *Knit Picks Muse, as a second sample!  (These are also forming the basis of some more Youtube Tutorials for the pattern, too!) 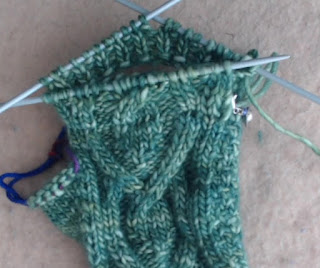 These have been tweaked ever-so-slightly from my first draft -- I shifted the mitten flap down by 1 row, so the mitten 'seals' a bit better when worn as a mitten.  My first attempt sometimes shifts enough to expose my palm, so, practice makes perfect, right?

Needles are still my 3.25 mm (US 3) workhorse Aero dpns -- I went to a very tight gauge for this aran yarn, so the mittens are very dense and wind-proof.  I thought about going down to 3 mm (US 2.5) but the cables would have been unmanageable at that gauge.

Twitch chat helped me choose buttons for these (we raided my buttons stash on stream!), so buttons have been chosen (they're from a very old sweater that's since been turned into rags, so yeay for upcycling!)  The pattern will also have instructions on how to use a snap for these as well, rather then a button, for those who find the i-chord loop at the top a bit undesirable.

And the question still remains, what are these mittens going to be named? No idea -- Patrons get to name them!

Well, that's been my work-in-progress this week -- what are you folks working on!  Feel free to share links in the comments!

Stay Safe out there!
Posted by Sarah Dawn at 14:51 No comments:

Hello folks! So, I'm happy to say, the testing call for my Diamonds and Lace Scarf is now live on Yarnpond!

The pattern has been languishing, only needing a few minor edits, and I got those edits done and sorted, so, now it's onto testing!  Though a bit belated, this is the next Patron-Exclusive pattern I've been cooking up, so, the only way to access it for now is to be a test-knitter, or a Patron!
I have to admit, I fell in love with the stitch pattern first, and then, had to hunt around for some yarn that would do it justice.

That yarn is Wisdom Yarns Poems in "Enchanted Forest",  though, as is usual for my luck, the yarn has since been discontinued (any heavy-worsted or aran weight yarn would work up fine as a substitute).   This was souvenir yarn from a trip to Windsor Ontario, where I got to stop into Pretty Skeins for a few hours!

So, onto the testing details!   You can find the test on Yarnpond.  Sample was knit on 5.5 mm (US 9) straight needles, and used just under 350 yards (300 meters) of yarn.   Actually, I was playing quite the game of Yarn Chicken when I knit the sample, so, if you're using the recommended yarn or something with a similar yardage per ball, you might want to consider having an extra ball on hand!  And, on that note, -- gauge and yarn weight are both flexible for this pattern, though it will change the appearance and/or size of the finished object.  The stitch pattern is both charted and written.

I'm looking for six testers, and, specifically, I'm looking for testers to test the large-print/screen reader accessible version of this pattern, so if that's something you're willing/able to do, just make a note of that on your Yarnpond application, and I'll send you the link to the large print pattern.

Deadline for the test is June 30th (though I'm willing to extend the deadline on an individual basis, if needed). Testers who complete the test will receive the finished pattern for free, as well as two patterns of their choice from my self-published patterns.

Also, if you want to be notified on Ravelry about new testing calls (both knit and crochet) you can PM me on Ravelry to sign up in my test-knitter's thread. And if you'd like to be added to my Yarnpond Testing pool, let me know your Yarnpond name!

So for this FO Friday, I finished the Feather on the Wind Mittens! 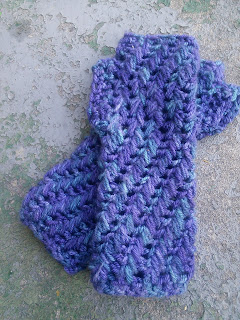 Yarn is Tanis Fiber Arts Amber Label in OOAK Colourway "Luxe",  It's a wonderful silk/cashmere/merino blend, and it's wonderful to work with (this skein tangled horribly, but I attribute that to user error!)

Hook is a *5 mm hook from Darn Good Yarn -- it came in the first month of the *Darn Good Yarn Subscription Box (which was ever so generously gifted to me by JennyKnits on Twitch!)   I really do like the hook (it's light-weight, which makes it so much easier on my hands)

I was actually really surprised at how quickly these finished up -- even though I went ahead and tweaked the thumb opening.   I did a lot of work on these while watching Netflix in the evenings; and they came together in a couple of hours!

So, what do you folks suggest for lazy evening Netflix? Any inspiration?
Posted by Sarah Dawn at 15:21 No comments:

"How Do I Knit That"? Podcast, Episode 10! Crafting in the Era of Coronavirus

So yeay for another episode of the "How do I Knit That?" Podcast? (And 'knit' also means 'crochet, spin, cross-stitch' but, it just didn't sound as good!)

Anyway, this is Episode 10; all about knitting and crocheting in the era of Coronavirus.

Have a Question for the Podcast? Head to Youtube and Leave a Comment! Questions should be related to knitting, crochet, or yarn. Questions about specific knitting/crochet patterns may or may not be answered, depending on if I have access to the pattern. Oh, and Patrons can submit audio or video recordings of their question, plus, they get early access to the podcast!


Anyway, hope you enjoy! Episode 11 will be available Mid-June And remember, Yes, you can, in fact, knit that!
Posted by Sarah Dawn at 13:14 No comments:

Email ThisBlogThis!Share to TwitterShare to FacebookShare to Pinterest
Labels: COVID-19, How Do I Knit That Podcast

So, I've been knitting more on the Ar Lan y Môr Socks and am working on the toe! It's been nice to get close to finish one of these, if I can finish both, I can put them in the growing pile of 'things that need to be photographed for pattern releases.' 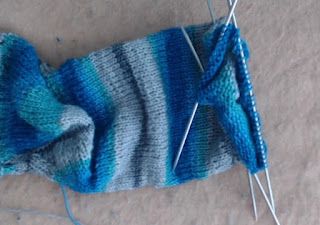 This picture ended up being of the sole, but it really shows off the amazing yarn -- *TurtlePurl Striped Turtle Toes This is in "Winter is Coming", which isn't available any more, but now there's a whole bunch of new colors in the shop!

Needles are *2.25 mm Hiya Hiya dpns, with one longer needle (I actually like the longer needles, but then they don't fit in *my needle cases!)  I have always mixed-and-matched my needles, as needed. It's nice if they're all the same set, but very often, they're actually not.

It's hard to see in this picture, but I have, in fact, started the toe decreases.  (My camera is being difficult today, so picture isn't the best. My apologies).  I'm really trying to power through at least one of these socks -- I want to get the raw video recorded for Youtube, so I can start making sock tutorial videos based on this pattern.  And while you're not seeing the lace pattern here, you can see it clearly on the previous post!

Anyway, with one sock almost done, I'm rejoycing in that soon, I might have another Finished Object!   My WIP-Busting continues (I hope?)
Are you working on WIPs?  Or have you cast on something new?  Post in the comments!
Posted by Sarah Dawn at 14:26 No comments:

Well, it's May!  The sun is out, and even though it's been rainy here, it's definitely spring!   I awaiting with great anticipation for this lockdown to be over; and one of the first celebration trips I plan to make is out to my local Farmer's Market! 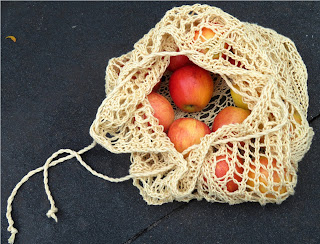 The bag starts with a pinhole cast on. Increases are worked into a leaf lace pattern to form the base of the bag. The leaf lace transitions to a lace mesh, and finishes with a garter stitch edging. A twisted cord allows for easy carrying and helps to keep the bag tied shut!

The sample was knit in FibraNatura Good Earth Solids, a worsted/aran blend of 53% cotton and 47% flax. The flax content makes the yarn quite durable, so if substituting yarns, I’d suggest a cotton/flax or cotton/hemp blend.The instructions are written, and the lace pattern is both charted and written. The pattern has been tested and tech-edited as well.

You can buy the pattern through Ravelry or Etsy, the discount is available on both platforms. The discount should be applied automatically on Ravelry, and be visible on Etsy. As always, let me know if something doesn't work!

For the month of May, any finished Spring Leaves Market Bag has a chance to win a $25 USD gift card from *EatSleepKnit; and one pattern from any of my self-published patterns! To enter on the blog, simply post a link to your completed bag in the comments by May 31, 2020! Please note that the bag doesn't have to have been started in May, just finished in May, -- so it's a good reason to pull out any WIPs!

You can also win by posting to the giveaway on Facebook, my Ravelry Group, and on Instagram, giving 4 chances to win in total!**

Also, you can also cross-post your Knit-Along Entries into the Toronto Knitter's Guild De-Stash/Re-Stash Make Along  (which has now also been extended to May 31!)

I always look forward to seeing your Finished Objects! Please post them to various social media with #SarahDawnsDesigns, and/or to my Ravelry Group if you're on Ravelry. That way, I can see the awesome that you folks make!

Stay home, and don't let Spring lure you out of your homes quite yet! Stay home, knit, crochet, make things, and enjoy your crafting!

**One entry per person for each project per platform (four possible entries total for each completed project). One Winner will be drawn at random using random number generation. Winner must have a valid e-mail address to receive the pattern and electronic gift card. Participants may enter the same project on more then one platform, but may only enter each project once per platform.
Posted by Sarah Dawn at 05:00 1 comment: