on December 30, 2016
I seem to be in the habit of writing very succinct post titles, but once again, the post title basically describes all that you need to know.

Here's my unfinished entry into the November/December Ravelry Designer's Challenge. 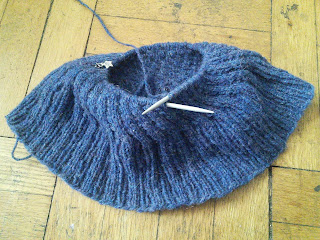 It's tentatively titled 'Convolution Hat'.  I was hoping it could be done for my father as a Christmas present, but a major tension fail set me back quite a bit of work (and that's why proper swatching is important folks!)

The themes of the challenge were to make a hat that involved texture, and I immediately thought of something that curled around itself.  I'm hoping to have all the cables come together at the crown.  It -should- work, but I haven't knit that part yet.